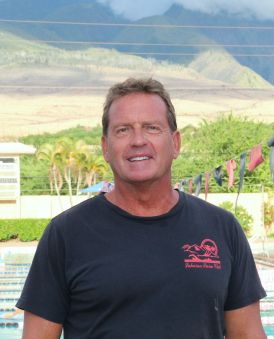 This is Coach Tom's 40th year coaching swimming! He started coaching Lahainaluna swim team in 1995 and Lahaina Swim Club in 1996. He has an extensive background in competitive swimming. Coach Tom earned a swimming scholarship to Villanova University in Pennsylvania, and after completing his studies there he embarked upon a coaching career. Tom has coached at Division I Temple University and the University of Virginia, as well as at an Olympic-level team in Mission Bay, Florida. In Boca Raton he coached Spanish River High School to 3 state championships. In addition, Tom has individually completed numerous marathon swims on the East Coast, swam from Lanai to Maui, and successfully swam the English Channel in 1983.